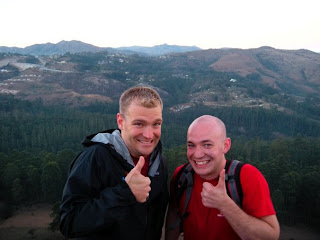 Day four of our trip started with a great breakfast prepared by the Emafini Hotel. I feel like the days spent getting to Swaziland were lost somewhere over the Atlantic Ocean. After our feeding time we jumped into our rig to begin the day and our week of ministry. The vehicle we’re using over here is called the Toyota Quantum, it’s a 10 seat van or “combi” as the locals say. We went to the Hope House Church in an area called Motjane where we met Pastor Louis Chomba. He started Hope House eight years ago out of his own home. He also runs an orphanage that houses and feeds abandon boys in the area.

The service was very fun. I didn’t know all the songs, but a few were recognizable and it was fun to sing along. The people at Hope House love to worship, a large portion of their service time was devoted to music, singing, and dancing. Pastor Brian stepped up and shared a message entitled, “Follow the Leader,” through an interpreter. I was impressed that he was alert enough to deliver such a clear and understandable message. The people felt honored that we had come to their church and after the service stayed around to greet all of us. The feeling was mutual however; I was honored to be there and loved meeting some of my long lost relatives in the faith.

After church we did what good Christians do and we headed out to eat. The Missionaries took us to a glass factory that had an adjoining restaurant. The food was good and so was the shopping. After our meal we headed back to our hotel and prepared ourselves for a hike up the hill behind where we are staying.

The hike we went on was about four kilometers and incredibly scenic. The sun was getting ready to set as we reached the summit and we took lots of great pictures. After some nice team photos we headed back to the hotel just as darkness was settling in.

We jetted off to the Myers where we had a traditional Swazi dish… homemade pizza. I have to take a moment and confess something here. I was convinced as I was preparing for this trip that food would be scarce and that maybe just maybe I would be able to shed a few pounds before heading home. Boy was I wrong! We are being fed really well here and feel like I’m going to have to start cutting down on all the stuff I’m eating. My intake is far out weighing what I’m burning so far.

While at the Myers house I was able to use my laptop and chat on Facebook with family and friends. I even had a chance to talk on the phone with Stacey thanks to the help of P. DJ and Skype. Skype is a program that allows users to talk for free computer to computer. It was great to hear Stacey’s voice and hear how things are going back home.

The Myers are incredible hosts and so gracious to allow us to sit on their couches drinking their coffee all while using their bandwidth. Internet services here in Swaziland are roughly $150 per month (and I thought Comcast was bad!) We had a great day today and tomorrow looks to be another one as we’re scheduled to visit the Sandra Lee Orphanage and the Government Hospital Children’s Ward.