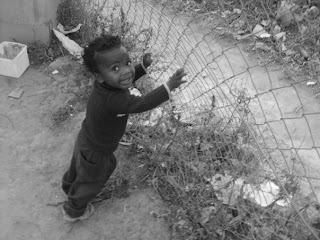 Today we were again able to minister at a school here in Swaziland. St. John’s Primary School (grades 1-7) opened their doors to us. It was so fun to see Shawn and Christa share today. The translator that we used, a teacher from the school, was unbelievably good. If you have heard Shawn’s testimony, you know that it is a miracle that he is alive today. As he told his story the translator would look at him in shock and say things like, “Praise the Lord!” or “What a Miracle.”

The students like yesterday were glued to the two stories that were shared. I was impressed with Christa who shared today as well. Public speaking is not something she has done a lot of, but today she shared and made a difference in the process. I wrapped up the two testimonies as I did yesterday and thanks to some good suggestions from P. Brian the students seemed to connect better with what we were trying to communicate.

After our school visit we broke into teams and went door to door with translators. We were inviting a neighborhood village (Nkoyoyo – take your best guess) to Sunday service at the Hope House in Motjane. People were extremely open to our visits and we were able to pray with nearly everyone we came in contact with. In addition, we took names and numbers of people who needed a bus to get to church on Sunday. At one house we stopped at we had privilege of leading a man to Christ. It’s pretty amazing to think that God has had this mans salvation day circled on His calendar since the forming of the earth. What’s more is that I got to be a part of it. I am humbled and amazed that God includes me in His plans.

In the afternoon we drove to the Manzinni to visit a ministry called, “The Faithful Church of Jesus Saviour in Swaziland.” Catchy name huh? It is situated between a feeding point (food bank) and a dump. The pastor who founded the church here moved his wife and seven children from neighboring Mozambique to start this children’s ministry. He purposely chose the poorest neighborhood in Manzinni to do so.

This neighborhood could be compared to the government housing or projects we see in the states. The king of Swaziland dedicates certain portions of land in cities to people with no money and no place to go. The missionaries told us that the teachers must deal with big distractions during the Bible lessons. During church a garbage truck will drive by and the kids from their seats to chase it down. They are looking for food and any items in good enough condition to sell to help their families buy food. Wow.

The kids were great. They wanted to play and be held, we obliged of course; even if we didn’t want to it’s impossible to say no. We gave them candy and we sat in a short service with them as well. P. Shari gave an impromptu encouraging word to the children and soon we were back outside playing. Visiting places here in Swaziland confirms again and again that the love of Christ knows no bounds. It is an honor to extend love and mercy to His little ones.

We finished the day at the Meyer’s house tonight. Friday is their “family night” so we watched the Disney movie “Bolt” with them. After the movie we were spoiled with banana splits (and I thought I was going to lose weight on this trip). Tomorrow is the soccer tournament, should be a big, fun community event. Even though it’s soccer, I’m really looking forward to it.