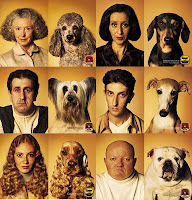 Do you ever notice how people that have been married a long time kinda look like one another? Or how about people and their pets? Isn’t that a little disturbing. Well, chances are you look and sound like the people your closest to. You have inside jokes that you share, you can give a slight head nod and the other person knows exactly what it is you’re not saying. This is natural and part of being human. Further more, it’s fun having those kinds of relationships.

Recently on two separate occasions people have told me I am doing something (a mannerism) or sound like my Senior Pastor, Brian Dolleman. The first time someone called me on it I thought, “Oh come on, I’ve always done that.” As they persisted I resisted and said, “Hey, I’m my own man all right?”

The second time someone called me on it I thought, “Fine, so what’s the big deal?” The truth is it’s not a big deal. I work with him and am around him often. I also happen to be learning a lot from him when it comes to ministry and life in general so yeah, over time I’ve unknowingly picked up on some of his sayings and mannerisms.

This is really just the tip of the iceberg. I often catch myself when talking with our two girls saying things my parents said to me. I didn’t even know I had remembered those things but they flow right out of my mouth without even thinking about it.

Do you sound like your favorite talk radio host? Do you spew sports knowledge while struggling to memorize scripture? Can you quote every line from the latest episode of The Office and then when someone is asking you for advice you draw a complete blank?

I’m not trying to make you mad or feel guilty. I’m just asking the questions that I have been asking myself lately. When people push my buttons, cut me off in traffic, and say negative things to me what do I sound like in return? I am embarrassed at times of the things that come to mind. At other times I’m mortified with what actually comes out.

2 Corinthians 3:18 (NLT)
So all of us who have had that veil removed can see and reflect the glory of the Lord. And the Lord—who is the Spirit—makes us more and more like him as we are changed into his glorious image.

So… who do you look, sound, and act like?