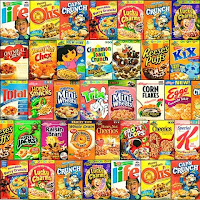 Last year on March 23rd I posted this…

“I love the NCAA Basketball tournament as much as the next guy, but lately I’ve realized something… It’s just not for everyone. Sure, everyone has their reasons for not filling out brackets: they don’t know the teams, don’t care about basketball/sports, or they actually have real lives to live. Here’s the deal though; I think that everyone has some competitiveness in them somewhere. So, I have decided that for the next couple weeks I’m going to try and find it!”

“I am proposing that we (me and anyone who happens across this blog) conduct a “Breakfast Cereal Challenge.” It will work just like the NCAA Tournament, we will pit YOUR favorite breakfast cereals against one another to determine the best of the best! My family actually did this at our Christmas party a few years ago and it was a lot of fun.”

It’s taken over a year, but I’m finally ready for the tournament to begin. The cereals will be vying for the coveted “Golden Spoon” award. I have placed them (Kyle, one of our interns has) into four categories based on their company of origin. The four brackets are General Mills, Kelloggs, Post, and our Wildcard bracket with cereals from each maker.
…So without any further ado I present to you the 32 breakfast cereals that will be competing in this year’s challenge:
GENERAL MILLS
Trix, Kix, Cheerios, Lucky Charms, Cocoa Puffs, Cookie Crisp, Cinnamon Toast Crunch, & Honey Nut Cheerios
POST
Honey-Comb, Golden Crisp, Fruity Pebbles, Cocoa Pebbles, Honey Bunches of Oats, Alpha-Bits, Waffle Crisp & Grape Nuts
KELLOGGS
Frosted Flakes, Rice Krispies, Corn Pops, Apple Jacks, Fruit Loops, Frosted Mini-Wheats, Crispix, & Corn Flakes
WILDCARD
Blueberry Morning, Life, Special K, Reese’s Puffs, Golden Grahams, Captain Crunch Berries, Cracklin’ Oat Bran, & Peanut Butter Crunch
The cereals will compete in head to head match-ups until we determine the best from each bracket (The Final Four). We will then vote for the best cereal in all the land, the “Golden Spoon” champion. Each of you will determine the outcome by voting by leaving comments on Facebook and my blog so please don’t be shy!!! We will follow the schedule of the NCAA Tournament, so by the end of this weekend we will be down to the “Sweet 16.”
As the NCAA Tournament progresses so will we until we have our champ.
The cereals are listed without a seeding next to them on purpose. Please leave a comment on my blog or on Facebook and pick your “Final Four” cereals (one from each bracket) and the cereal you think should be this year’s “Golden Spoon” award winner.
This should be lots of fun, but I’ll need lots of participation to make it happen. Check back often and good luck to all those who compete… May the best cereal win!