We walked around our school and took swabs (cultures) of what we thought were the dirtiest places around the campus.

The culture was then placed on the dish and we waited to see which dish would grow the most bacteria. The culture would spread through the dish in the form of mold. 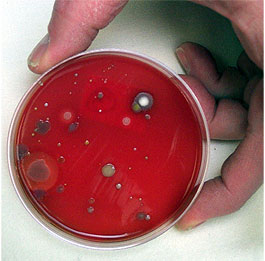 I remember the first time I did this experiment in elementary school. I tried to guess which locations were the dirtiest. Places like the toilet seat, the bathroom floor and drinking fountain.

The surprise in the Petri Dish experiment of course is where bacteria is actually found. It’s in the most common places. Door handles, cabinet knobs, and desktops.

Places like toilet seats and bathroom floors are actually very clean because they are constantly being sterilized.

The lesson? I guess students should stop eating lunch in class and head to the restroom.

Jesus actually faced a culture war of sorts while he was here on earth.

He was constantly confronted with culture norms that were in desperate need of revising.

Like my little science experiment, Jesus surprised us with the places he seemed to do the most cultural restructuring.

It wasn’t with the down and outers we would have thought of when he first showed up.

Jesus hung with the dirty sinners of the day. Prostitutes, tax-collectors, social outcasts and others considered to be the scourge of society.

Yet he wasn’t there to fix them or judge them. He simply befriended them.

The people Jesus critiqued the most were the ones deemed to be holy and beyond reproach. Jesus was outspoken when it came to correcting the religious experts and professional church-goers.

“What sorrow awaits you teachers of religious law and you Pharisees. Hypocrites! For you are so careful to clean the outside of the cup and the dish, but inside you are filthy—full of greed and self-indulgence!” (Matthew 23.25, NLT)

When Jesus’ friends suggested calling down fire from Heaven on a rival religious group Jesus again slapped down their cultural norm and reestablished Kingdom culture.

Jesus (turning toward them and shaking His head): “You just don’t get it. The Son of Man didn’t come to ruin the lives of people, but He came to liberate them.” (Luke 9.55-56, The Voice)

When a woman was caught in the very act of adultery (not sure how the Pharisees set this up) the cultural norm was to stone her.

Jesus approached the situation differently and established a new culture:

They kept demanding an answer, so he stood up again and said, “All right, but let the one who has never sinned throw the first stone!”

When the accusers heard this, they slipped away one by one, beginning with the oldest, until only Jesus was left in the middle of the crowd with the woman.

Then Jesus stood up again and said to the woman, “Where are your accusers? Didn’t even one of them condemn you?”

Matthew 5 is full of, “You’ve heard it said, BUT I say to you…” statements from Jesus.

He understood Kingdom Culture it and made it his mission to help us understand it as well.

The “dirtiest” people were people Jesus loved and spent time with.

Kingdom Culture demands we view things and people the way Jesus does.

That’s a culture worth spreading.