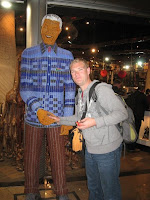 Our trip ended with some shopping and a safari. We spent our final night with the two missionary families (Myers and Drew). Taking time to verbalize how everything went on the trip was very helpful to me. To hear the missionaries express their gratitude to us just for playing with their children was pretty humbling. I felt so privileged to come along and serve. I felt like I should be the one saying the thank yous. Thanks for including me in this incredible experience.

Early on Tuesday the 28th we got up, loaded our bags and started out on the five hour drive to the airport. I rode with the missionary (Doug) and had a great time talking with him about his life on the mission field. I am struck with the thought that we (US church people) need to support these “Heroes in Faith” with more than just our dollars. Certainly, they need our finances, but beyond that our prayers, cards, emails, facebook comments, etc are valued as well. Spending the time Doug on the drive to the airport was a lot of fun and helped me understand his heart for the work he is doing.

Getting on the plane and heading for home felt so good. While on the plane I kept fighting the temptation to stare at my watch, as if by looking at it time would go faster. I tried to sleep but I kept thinking about my wife and daughters. The flights worked out much better on the way home, probably because we only had two this time. Johannesburg to Paris (about 10 hours) and Paris to Seattle (another 10 hours). Neither flight seemed overly long and there was some pretty good food served. Shoot, I was ready to get home; the details of the flight didn’t concern me as much as landing back home where my family was.

After getting my bags searched and my ostrich jerky taken away at customs (an entire post on it’s own) I took the train to be picked up by my wife and girls. As I came outside to the 90 degree heat I saw the familiar dent on the back of my truck, which by itself made me happy to be home, then I spotted Stacey. After a big hug and kiss from her I moved quickly around to the passenger door behind the driver seat and saw Andrea smiling as wide as I ever have seen her smile. Hailey was just as excited as her sister, but I assure you, neither one was as excited as I was to see them. Andrea just kept repeating all as we drove, “You’re home from Africa Daddy.”

Yes. I am home from Africa and I’m a better man because of what God did in and through me on that trip. I look forward to seeing Swaziland again in 2011. Wanna come?