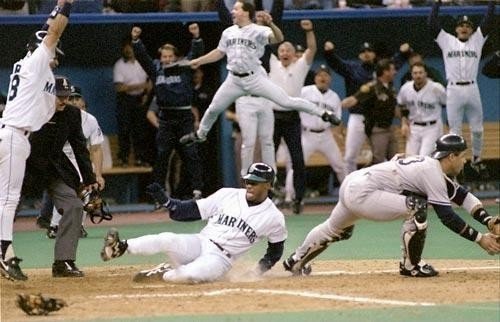 In 1995 the Seattle Mariners enjoyed a magical season that ended with their first ever playoff appearance.

They overcame incredible odds and injuries en route to what is widely considered one of the most improbable seasons of any franchise in baseball history.

In May of their miracle season their all-star and future hall of fame center fielder, Ken Griffey Jr. broke his wrist making a leaping catch against the outfield wall.

He would miss the next three months of the season.

The Mariners were 13 games behind the first place Angels in August, a seemingly insurmountable lead.

As late as August 24 the M’s were 11.5 games back. Again, for those who don’t speak baseball… they were in bad shape.

During the final month of the season something started happening. The Mariners won games they shouldn’t have been winning.

The finishes to the games were incredible. Game winning hits and homeruns became commonplace.

Unsung heroes emerged as the M’s continued their remarkable comeback.

Along the way the fans and team adopted a motto: Refuse to Lose.

It was printed on signs and shirts; it was chanted at games in the cavernous Kingdome.

Fans believed it, but more importantly so did the team.

They closed the gap and eventually made it to the playoffs after winning a one game playoff with the California Angels.

While it’s fun for me to write and reminisce about the 1995 season there is a concept worth applying to everyday life.

It’s the phrase: Refuse to Lose.

In real life we lose and must deal with it.

But the slogan refuse to lose is really referring to a spirit and attitude believers should possess.

Becoming a Christian does not give you an exemption card from having trouble or having to deal with loss.

However, a winning attitude and spirit are yours because of Jesus.

“In this world, you will be plagued with times of trouble, but you need not fear; I have triumphed over this world.” –Jesus

Troubles will come, but victory is found in him.

“No, despite all these things, overwhelming victory is ours through Christ, who loved us.” (Romans 8.37, NLT)

Because of Jesus, Refuse to Lose can become more than a catchy slogan from a miraculous baseball season.

No matter what you’re facing today, Jesus is with you.

He is for you.

The victory you’re looking for has already been won through him.